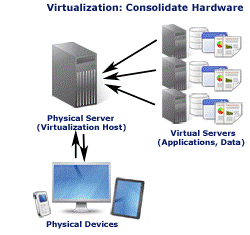 Virtualization is a proven software technology that makes it possible to run multiple operating systems and applications on the same server at the same time, managing server resources by  providing abstraction layer between the software and the physical hardware. Virtualization turns physical RAM and storage into logical resources.

Using server virtualization, a company can maximize the use of its server resources and reduce the number of servers required. The result is server consolidation, which improves efficiency and cuts costs.

A virtual computer system is known as “virtual machine” (VM):  a tightly isolated software container with an operating system and application inside.  Each self-contained VM is completely independent. Putting multiple VMs on a single server enables several operating systems and applications to run on just one physical server, or “host”. 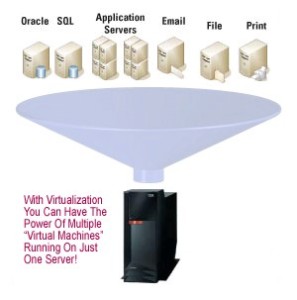 Partitioning the computer's memory into separate and isolated "virtual machines" simulates multiple machines within one physical computer. It enables multiple copies of the same or different operating systems to run in the computer and also prevents applications from interfering with each other.

In a network, virtualization consolidates multiple devices into a logical view so they can be managed from a single console. Virtualization also enables multiple storage devices to be accessed the same way no matter what their type or location.